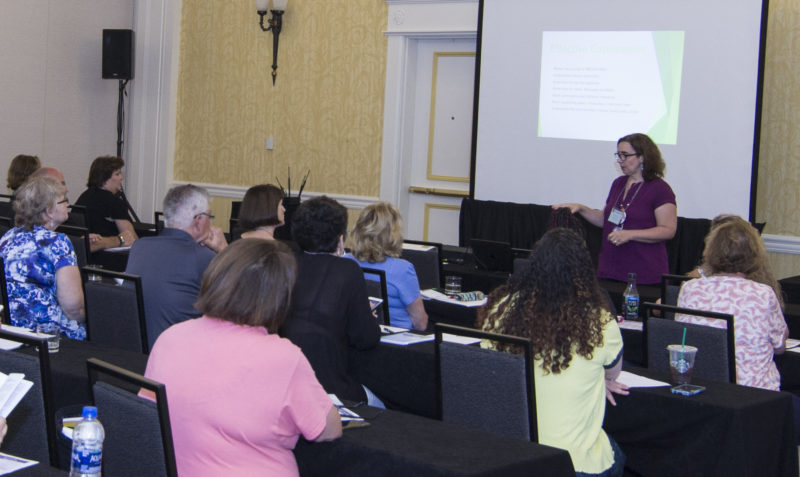 Helping is Healing, but, Oh, So Much More: Presenting a TCF National Conference Workshop

Having attended 19 National Conferences of The Compassionate Friends (TCF) in a row — from Portland in 1999 to St. Louis in 2018 — I have presented, co-presented or been a panelist on workshops for 17.  I was asked by author and friend, Genesse Gentry, to co-present “Journaling as a Healing Tool” with her at the 2001 TCF National Conference held in Crystal City, VA. Since it was the first workshop that I’d been a part of, I was a bit nervous about saying yes…well, actually…a lot nervous. However, my confidence was buoyed by not doing my first one alone, but with someone who had experience. Since that time, I have given many workshops, even alone!  And I am so glad I took that first step.

Thankfully, the reviews were mostly good; no one wrote that they’d never go to another workshop that included my name, and Genesse asked me back the next year to do a different workshop with her – all of which was reassuring. The complimentary comments of attendees made me feel I had helped make their burden of grief a bit lighter. And they were excited to start putting their feelings down on paper and try the writing exercises when they returned home.

In the early years of my journey, I vowed that I would do all I could to help other bereaved parents, just as I was helped by others through The Compassionate Friends when my daughter Nina died, and years later when my “bonus” son Chris also died. Perhaps I had found a way that I could give back! That what others had been telling me all along was true: helping really was healing! But what became clear to me was not necessarily what I got back from presenting, but what we gave to each other by our shared experiences. Workshops are not a lecture. For many, the interactive part of a workshop towards its conclusion can be the most important part. This is where the workshop attendees can ask questions of the speaker and express their thoughts and feelings. Specifically, we learn from each other.  And what we give is returned to us tenfold.

However, I am only one of hundreds who have presented workshops over the 42 years of TCF national conferences and wanted you to hear from others. Therefore, I asked some of TCF’s past workshop presenters what being a presenter has meant to them and  I’m pleased to say they were happy to oblige:

“Being a workshop presenter for The Compassionate Friends has changed my life.  When I saw that I could help inspire other grievers to find healing on their grief journey, mine was lightened beyond measure” ~ Mitch Carmody, Kelly’s Dad and Sandy’s brother, longtime presenter of Whispers of Love, Who Am I As A Griever, The Many Faces of Grief, and others.

“For me, being a TCF workshop presenter is a privilege. It gives me the awesome opportunity to share some of the things I have learned. More importantly, it allows me the opportunity to create space where their story is received as well.  Hopefully, they leave my workshop with more hope in their hearts.” ~ Dennis Apple, Denny’s dad, longtime workshop presenter of Struggling to Reclaim My Faith and Dealing with Grief Bullies.

“Being able to serve in an atmosphere of shared experiences excites me; knowing that others that sit in that space and choose to participate gives room for shared growth and movement toward an outcome of hope. Serving with my wife gives us an opportunity to model the dynamic of healing together and meet the needs of a greater audience as we collaborate and present giving different views and ideas.” ~ Bradley Vinson, Alannah’s Grandfather, first-time workshop presenter in 2018 of When Grandparents Lose a Grandchild: Realities of Out-of-Sequence Loss and Men Grieve Too, Just Different.

“Being a workshop presenter does two great things for me. First, it helps keep the memory of my brothers alive. Second, it’s incredibly rewarding to help someone and have them say that you were able to give them a little bit of hope.” ~Chris Lourenco, Zach’s and Alex’s brother, workshop presenter of Sudden Loss: Resulting Differing Perspectives of a Parent and Child (presented with mother, Denise Lourenco)

“I agree with the notion that helping is healing. Supporting others who have lost their cherished child may be the best way to constructively channel what we have to offer. The time spent researching, writing, and practicing is time we invest in our children. It’s our gift to them.” ~ Peggi Johnson, Jordan’s mom, six-year workshop presenter of Healing When Faith is Not an Option.

” Being a first-time presenter last year at the national conference showed me a different side of the grief journey. My hope is I can help give someone else that first sliver of hope in this journey of grief by sharing my story and my daughter’s story. ” ~Julia West, Sophia’s Mom, first-time workshop presenter in 2018 of Loss of Infant and Toddler: A Panel and The Many Paths to Hope Following Loss Due to a Medical Error: A Panel.

“In the 20+ years I’ve presented workshops, offering Death of the Difficult or Troubled Child has been the most gratifying. Although it is  very emotional, it offers parents, siblings and grandparents a chance to talk about their difficult child and to hear about others’ so that they  no longer feel alone. At least one parent annually comes back to tell me how helpful the workshop was.” ~ Marcia Alig, Daniel’s mom, longtime workshop presenter of Death of a Difficult or Troubled Child

We sincerely hope that you feel encouraged by the comments of those above who have presented workshops. Our conference attendees are always hungry for information on ways to survive the devastating experience of loss, finding meaning in life again; reinventing themselves, and a host of other topics that may yet be uncovered.  We hope you will give the prospect of bringing a new workshop to the 42nd National Conference some thought. The Call for Workshop Presenters opened Friday, December 14th and closes on January 11th.  TCF is always looking for new presenters to add to our tried-and-true from year’s past. We look forward to seeing you in Philadelphia July 19-21, 2019!