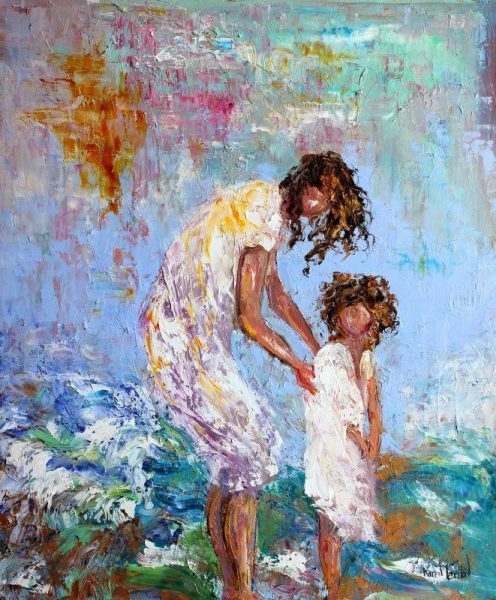 Mother’s Day: “Before” and “After”

While sorting through boxes and bags, it is not unusual for me to find something unexpected. It happened just the other day. Shifting through a box, I came across a wrinkled, somewhat yellowed piece of lined school paper. I carefully unfolded it only to find a drawing of a stick-Mom and stick-daughter standing alongside a mammoth daisy. The mom and little girl were holding hands with huge lop-sided grins on their faces. In her little girl just-learning to-print handwriting were the words, “Happy Mother’s Day, Mommy. I love you, Kristina.”

Even six years later, little “gifts” such as these can bring fresh tears. It is times like these that I am glad that I was an incredible pack rat, especially when it came to saving things that my children have made. I can picture my then-blond, petite little Nina (her nickname), with the wispy hair, bent over the kitchen table, crayon in hand, creating that handmade card filled with love. Memories of breakfasts in bed, only to return to the kitchen after finishing the “gourmet” meal served with tender care, to find it in such disarray that it took hours to clean up! Even through the tears, these are the sweetest memories.

As I type this, I look at another gift from a Mother’s Day past; a little statue of a harried mom, surrounded by mop, broom and bucket, that says, “World’s Greatest Mom”, chosen for me at a neighborhood garage sale. I came across it accidentally shortly after Nina’s death, unearthing it

from its hiding place. I wondered to myself, why had I packed it away. Did Nina know that I did and did she think that, by doing so, I hadn’t appreciated her gift? Did I ever thank her for it along with the other garage sale items that she proudly brought home to me, or did it show on my face that I really didn’t need any more “junk” around the house? Sometimes resurrecting these treasures can bring unpleasant feelings of guilt as we wonder if our children knew how much their little gestures of love meant to us. When our child dies, it becomes easy to second-guess ourselves, trapped in our fixations and exaggerations of the negative things that may have occurred during our child’s life.

The first Mother’s Day after Nina died was a grief numbing blur, as it occurred only three days following her death. Unlike previous joyful dinners out with my four children pampering their mom, we spent the day making funeral arrangements and choosing a casket for one of them. In the early evening, I overheard it said to someone else, “Happy Mother’s Day.” I turned to my own mother and apologized for having forgotten.

I could not imagine ever celebrating another Mother’s Day again. I am sure the dads have these same feelings on Father’s Day. My heart goes out to them, because I think we forget that they, just like us, grieve and hurt, too.

For those mothers and fathers who have lost their only child, I have been saddened by stories told to me by them of attending church on Mother’s Day Sunday and when the pastor asked the mothers in the church to please stand, they were undecided on whether they should stand or not. I hope that they will always remember, and the fathers as well, “Once a mother, always a mother; once a father, always a father.” We are forever their parents.

If we are fortunate to have surviving children, they are often forgotten as well. In the early days, we become obsessed with the one who is missing. My own children showed quiet patience with this. I often wonder if they thought “What about us? We’re still here!” Now with almost seven Mother’s Days behind me, I try to accentuate what I do have. This does not happen overnight. I found that in celebrating my surviving children, I could still honor Nina’s memory and find ways to include her as well. I have developed a ritual where I get up early on that morning and bring flowers out to the cemetery. I bring a flower and a note to some of the mothers that I know who have buried children there to tell them I am thinking of them and their child. There is something very healing when reaching out to others. I then sit by my daughter’s grave-site on the spring-green grass listening to the sweet call of a robin. I bring her a flower and write in her journal telling her how thankful I am to be her mother, how much I love and miss her. That is our private time together; the rest of the day is spent honoring my other children.

Mother’s Day and Father’s Day are holidays especially created for us. Try to get through them the best that you can, in whatever way feels right for you. Truly, only you know what that is.

Whether it is alone those first few years or with people that you love and who understand, do something that you find comforting. It is your day, for you were the giver of a precious life – you held a miracle in your arms. Even as powerfully destructive as death is, even that cannot take those memories away from you – they are your child’s gift to you.