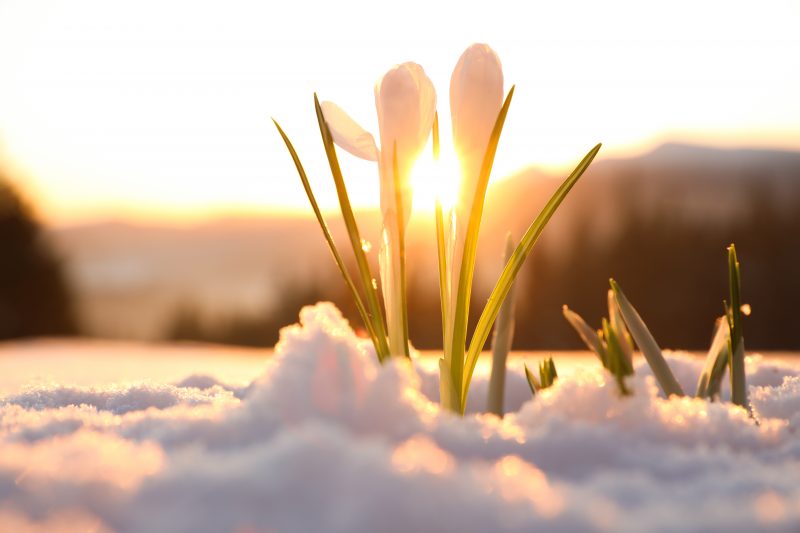 We are nearing the end of what has often been a brutal winter. While gazing at the mountains of snow piled high in my front yard and the foot-long icicles hanging from my roof, it is hard to imagine that spring will ever come. We have endured bitter cold winds that have chilled us to the bone and treacherous roads that we have cautiously traveled. The days have been long and dark and often free of sunlight. No matter how long I have been a native of the Upper Midwest, I know I will be glad when it comes to an end.

However, as I described these thoughts about winter, I felt as if I was describing the days of my early grief. At that point, I did not believe that a day would ever come when I would thaw from the chill that had overtaken my body and mind. The bleakness of my existence during those early months after Nina died is almost frightening to remember; it is so difficult to even conceive of that much pain. I was anesthetized from some of its cruelness by the protective blanket of numbness that shielded me from the gale force of such overpowering sorrow. How could I ever feel spring in my heart again?

Spring had always been my favorite season. The air had a certain freshness to it that I would drink in. Simply put, it always made me feel happy and light of heart. Spring was our reward for surviving the freezing winter months that preceded it. It brought a smile to my face and a bounce to my step.

However, it was the spring of the year where my heart was irretrievably broken into a million pieces. It was during this exquisite season of warm, lilac-scented breezes and sun-kissed mornings where my precious, beautiful daughter Nina’s life would end.

I wondered if my thoughts about spring would ever be the same. Rather than anticipate with gladness the coming of spring, I dreaded it with the knowledge that it now included the anniversary of her death. The smell of the air and the look to the sky that I once found exhilarating now brought me back to my darkest day. I know that anyone, who has lost a loved one to death, no matter the season or relationship, understands.

Will spring come again to your life? In the almost six years since Nina died, has it come to mine? Looking back at my description of the winter of “my early grief”, I know that I have come a long way from that time of despair. I have found, especially after the first two years, that with each subsequent spring, I have rediscovered some of the pleasure I used to feel. I have also learned that just because I have found things to feel joyful about again doesn’t mean I am dishonoring my daughter’s memory. I now take her along with me in my mind and my heart. I try to retrieve memories of the dandelion bouquets she so carefully gathered and presented to me, the rides to the park in the Radio Flyer, our talks while sunning on the deck, and, of course, shopping for spring clothes! Her favorite pastime! I will always feel uneasiness, apprehension and sadness as May 11th draws near, but I no longer hold it against spring.

It is a slow, difficult journey this grief pathway we travel. It is as treacherous as the roads we maneuvered following the winter storms, never knowing when we will hit an icy patch on the road and be thrown into a tailspin. Yet, we must travel it if we are to find any measure of peace and healing.

Please be patient with yourself as you are working hard to survive this winter in your heart. Trust that spring, though a much different one than the one we knew before our beloved child died, will come again.