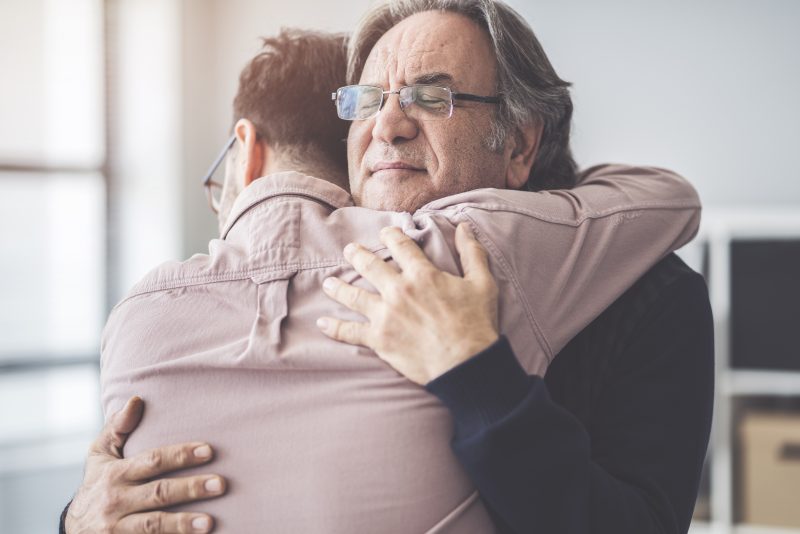 A Bear Hug for Father’s Day

As Father’s Day approaches, we are reminded of the significant contributions and unique love of fathers and stepfathers. Their defined role, after the death of their children, is to support their wives and surviving children. But their pain is deep.

Men, by their nature and in response to our society’s expectations, do not usually grieve as openly as women. They do not talk as candidly about their loss. They generally do not reach out to others for comfort. They are, after all, the rock, the solid center of the family. Their wife’s pain supersedes their pain because women are fragile. Or so we are told.

What can a father do? Talk with other bereaved fathers. Read books written by bereaved fathers. Talk with spouses, private counselors and close friends who are not as structured in their “male” societal roles. Try to attend three meetings of Compassionate Friends. You don’t have to talk. But you might decide to express a single thought or idea, logically presented, to the small group. You might find peace in this place, and then again, you might not. But, as my own dad often said, “Step up to the plate and see what happens.” He was a pretty wise man……a child of the depression, a football player, Greatest Generation, WW II Marine, a fighter, a provider, a protector…..a man’s man. He endured much in his 78 years, and I only saw him cry a few times.

But when his friend lost a child, my tough dad was the first one to reach out with a bear hug that wouldn’t let go until the tears began to flow. They both cried. They both knew that the agony of losing a child was far worse than the horrors of war. Together, they cried.

Happy Father’s Day….May your bear hugs be many and your memories become sweeter with each passing year. May your child live forever in your heart so that peace embraces you always.

~Annette Mennen Baldwin, in memory of my son, Todd Mennen and my father, James M. Mennen

Annette Mennen Baldwin is a long-time business owner and active volunteer within her community in Houston, TX. Her only child, Todd Mennon, died in 2002. She has been a member of The Compassionate Friends and served in various roles, one as Regional Coordinator for the Southern Texas chapters. Her first book, Child Of My Heart:A Mother's Grief Journey, was recently published.