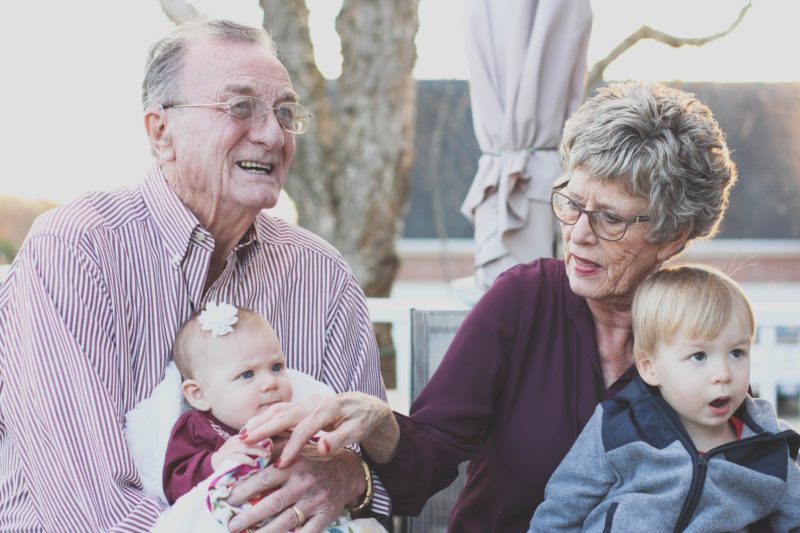 We’re in good company. According to the American Association of Retired Persons (AARP), 10 percent of all grandparents in the nation are raising their grandkids. That’s a lot! Raising grandkids is so common, many states have special departments and blogs. As my husband and I discovered, becoming a GRG turns life upside down.

Our quiet lives became noisy lives, filled with the sounds of guitar chords, trumpet “runs,” drum beats, rock music, and singing. Our grandkids were 15 years old when they moved in with us. They are now 20 years old, responsible adults, and juniors in college. For us, being GRGs was, and continues to be, a sacred mission.

Why are GRGs grieving? Many are grieving for deceased loved ones. We lost four family members in 2007: our daughter, my father-in-law, my brother, and our former son-in-law. Grieving and raising grandkids has been a huge challenge. The promise we made to ourselves and our grandkids: We will not fail you.

The causes of grief vary. The American Academy of Child and Adolescent Psychiatry cites some of the causes in its article, “Grandparents Raising Grandchildren,” and they include an increase in single-parent families, high divorce rate, teen pregnancy, AIDS, a parent on drugs, parental abuse/neglect, and the death of a parent or parents.

There are other causes, too, like an abandoned baby, runaway parent, parent in prison, or parent with a terminal disease. Some grandparents are raising their grandchildren because the parent is in the military and stationed overseas. While grandparents are caring for children, they also grieve for themselves.

Grandparents must process their own grief. Caregiving responsibilities may lead to depression, according to Laura T. Coffey, author of 10 Tips for Grandparents Raising Grandchildren. She thinks GRGs need to “recognize that depression is common among grandparents” and see a physician if they think they’re depressed.

Our grandchildren grieved for many losses. When the twins moved in with us, they were in the same school district, but a different zone. According to regulations, they were supposed to transfer to a different school, something they didn’t want to do. I went to the high school office to straighten things out.

I was asked to sign an exemption form. Signing the form would prohibit the twins from participating in plays, concerts, and sports. “What?” I exclaimed loudly. Everyone in the office looked up, and the principal rushed out of his office. “My grandchildren have lost their parents, their dog (she died in the second crash), their house, and their neighborhood,” I explained. “They’re not going to lose their school!”

I almost added, “Don’t mess with a grandma,” but thought better of it. The principal promised to make things right and he did. Later, I found out that students were transferring to different schools to be on winning sports teams. GRGs need to be aware of children’s grief, acknowledge it, and offer comfort. Seeing grandchildren in pain can wear a grandparent down, and that’s why self-care is important.

GRGs worry about themselves. I wondered if I would have the energy I needed. Would my health suffer? Was I doing things “right”? As the years passed, I got into the grandparenting groove and felt I was doing a pretty good job. I cooked homemade, balanced meals, proofread homework when asked, and attended school events.

A Head Start report, “Grandparents Raising Grandchildren: A Call to Action,” details the effects of caregiving. In addition to financial needs, food insecurity, and mental stress, many GRGs have health problems, such as diabetes, high blood pressure, and high cholesterol. I try to have a physical exam each year. In my second year of caregiving, I was diagnosed with dangerously high blood pressure and went on medication immediately.

All GRGs need to take care of their health. Equally important, they need to identify their needs. I need to write. Some friends said I’d have to give up writing to be a caregiver. I’ve been a freelancer for 35-plus years. Giving up writing would feel like another death in the family, and it would be mine. A week after my daughter died, I decided to write my way through grief.

I sat down at the computer and, with tears streaming down my face, poured out my soul in words. The writing decision has been one of the best decisions I ever made. If you aren’t writing about your grief journey, please consider it. Start a journal, diary, or write some affirmations. Writing will help you figure out your needs and your location on the recovery path.

Doing the things parents used to doesn’t make GRGs replacement parents. Trying to replace parents can spark children’s anger and outbursts. Grandkids are already angry because their parents are gone, their lives are in limbo, and they’re living with “old folks.” Anger is a difficult emotion, and if unchecked, may slow the recovery process. We wanted our grandkids to know that we understood our role. “We’re not trying to replace your parents,” I told my granddaughter. She nodded her head.

In the early stage of grief, I wanted to tell stories about deceased family members. I didn’t. Telling stories would lead to tears, and if I started to cry I might not stop. Still, I continued to do my grief work, and day by day, I gradually felt better. The day finally came when I could tell a story about my daughter and the twins loved it. I told the story about the pet hamster with the damaged tail.

Somehow, and nobody knows how the twins’ hamster lost the tip of his tail. My daughter, a composite engineer, came up with a quick solution. She attached the missing piece to the tail with superglue. Amazingly, this worked. The twins grinned at the story, and we continue to share lots of stories today.

Other than marrying my husband and having my daughters, being a GRG has been the greatest joy of my life. Five years have passed since we lost four family members, and we have become a grandfamily. Dark times have been replaced by bright ones. I’m not living the life I thought I would have, yet I have a happy life. Becoming a GRG changed me. I understand the power of love and know it is stronger than grief.

Harriet Hodgson is the author of 37 books, including Smiling Through Your Tears: Anticipating Grief, Lois Krahn, MD, co-author; Writing to Recover: The Journey from Loss and Grief to a New Life; Writing to Recover Journal; 101 Affirmations to Ease Your Grief Journey: Words of Comfort, Words of Hope; The Spiritual Woman: Quotes to Refresh and Sustain Your Soul; Help! I’m Raising My Grandkids: Grandparents Adapting to Life’s Surprises, and Happy Again! Your New and Meaningful Life after Loss. Visit www. harriethodgson.com for more information about this busy author.