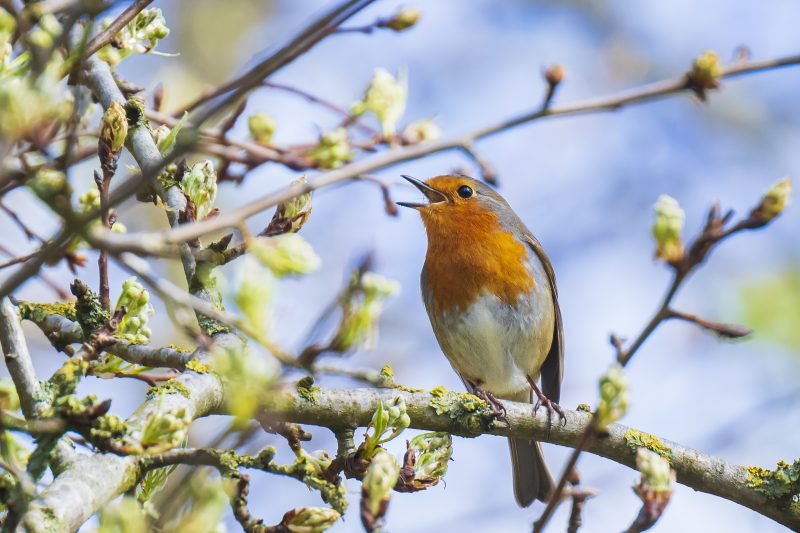 It’s spring once again. Our part of the world is turning back towards the sun; trees are leafing out; wildflowers are blooming. Robins are again singing to one another. And, I believe, also singing to those who are grieving.

Before my daughter Lori died, I was under the misperception that only the English robin had a glorious song. That smaller, red-breasted scalawag of a bird delights all who hear it, and I had felt that we in the United States had been short-changed when they’d misnamed its larger, boring American cousin the same sweet name. All I’d ever heard our robins do was cheep!

Then one June day, almost a year after Lori died, during one of the darkest times of my grief, my ears and heart flew open with surprise at a song I heard outside my window. I distinctly heard, in the midst of my pain, a bird singing loudly and clearly, “Cheer up! Cheer up! Cheerio! . . . Cheer up! Cheer up! Cheerio!” I went outside to see what marvelous bird might have been sent to sing to me. I could barely see the bird at the top of the neighbor’s poplar tree, so, while hoping this exotic, magical bird wouldn’t fly away while I was gone, I went to find our binoculars.

Rushing back, I could hear the bird from each room in the house. After adjusting the binoculars, I was truly amazed to see one of our “boring” American robins come clearly into view! As he continued singing clear as day, “Cheer up! Cheer up! Cheerio!” I marveled at this special message and wondered if my robin was the only one who sang these words. So I looked it up in my Audubon Society Field Guide to North American Birds and found that my robin was not an anomaly, but that robins are considered “the true harbinger of spring, singing “Cheer-up, cheer-up, cheerily.”

I stood there that day filled with wonder. I wasn’t hearing things; there it was in the bird book: “Cheer-up, cheer-up, cheerily.” I thought to myself, “Cheerily . . . No, that isn’t what I hear.” We had lived in England for a year and our family, especially Lori, who loved to put on an English accent, often said “Cheerio!” to one another when we meant, “Goodbye” or “See you later!” There was no doubt in my mind as I stood there listening. It WAS cheerio. Lori could have found no more perfect way to try to cheer me up AND say “hello!”

Nine springs have passed since then, and although I will always deeply miss Lori’s physical presence in my life, those darkest of times are thankfully now mostly in the past. It is spring once again and as I hear the robin singing so hopefully in the highest branches, it takes me back to that summer day, and I smile, remembering. And I think of all those who are now in the darkest depths of their own grief and pray they too will hear this lovely song.

Genesse Gentry is the author of two books of poetry, Stars in the Deepest Night - After the Death of a Child and Catching the Light – Coming Back to Life after the Death of a Child. She lives in northern California with her husband Bill. They are the parents of daughters Megan and Lori, who died in a car accident in 1991 at the age of 21. Following Lori’s death, Genesse and Bill joined the Marin County, California Chapter of The Compassionate Friends (TCF). Genesse has continued being involved in that organization ever since. She has been meeting group facilitator for both the Marin County and San Francisco meetings as well as chapter leader. She is currently on the steering committee of TCF Marin, as well as Regional Coordinator for Northern California. She presents writing workshops at national conferences of The Compassionate Friends as well as for northern California chapters.