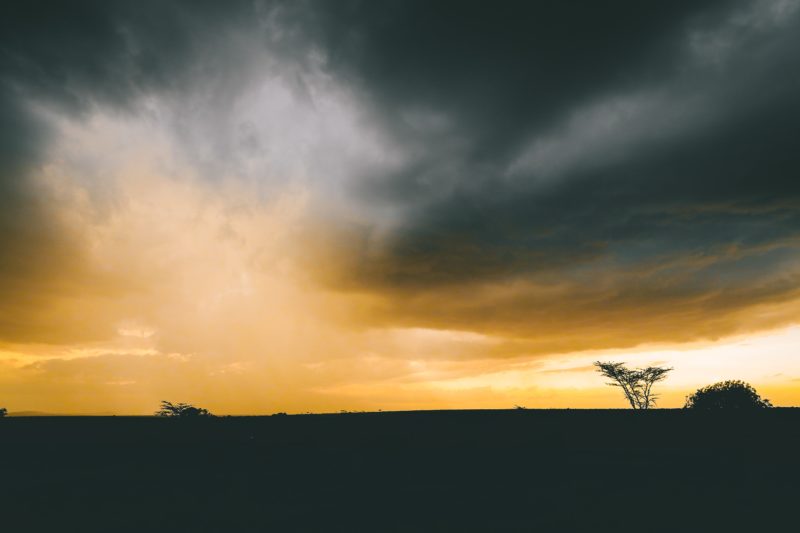 My son, Dan, had a special way of igniting a spark in the heart of anyone who met him. However, when he was killed trying to tell the world an important story, the light in my life went out.

My spark had first been lit when my husband and I moved from a drab suburb in London to sun-drenched Nairobi, Kenya, with our two young children, Dan and Amy. As a young freelance journalist with the local newspaper, my mind was constantly exploding with new ideas about how I could tell stories that might make a difference in my adopted country. Dan trailed alongside me when I went on assignments and would often shoot photos for my stories.

Naturally, I was proud when Dan, then 21, traveled into Somalia in June of 1992 with a friend from Reuters News Agency to shoot photos of a little-known famine that was raging in the country. His photographs of starving men, women, and children brought international attention to the plight of the hungry Somalis and helped trigger an international response, “Operation Restore Hope,” which brought aid to the people.

Over the next year, Dan returned to Somalia again and again, documenting a situation that was rapidly spiraling into a violent civil war led by General Aideed, a ruthless warlord. By June of l993, deeply concerned about my son’s safety, I encouraged him to leave, but he explained that his job wasn’t done and that he had to remain in Somalia to tell the story to the world.

On July 12, 1993, United Nations forces bombed a house in which they believed General Aideed was hiding. However, the warlord was not there, and in the brutal attack, 74 innocent people were killed and scores more seriously injured. Survivors rushed to the hotel where foreign correspondents were staying to beg them to come and record the carnage. Several, including my son, agreed to come, but only if they were accompanied by armed guards.

When the convoy of journalists arrived on the scene, hundreds of people had gathered in the compound of the bombed house. As the photographers and camera operators began to photograph the dead and dying, the mood turned. Enraged by the deaths of their friends and family members, the crowd shot, beat, and stoned four journalists, including Dan, to death. He was 22 years old.

When I received the devastating news that Dan had been killed, my daughter and I flew to Nairobi to join hundreds of people gathering to celebrate the remarkable life of this young man who was my son. The “Celebration of Life” was to be held on the edge of the Great Rift Valley, on the land of his Masai “mother,” who had dubbed him “Lesharo,” which means “the laughing one,” for his contagious sense of humor and constant smile.

Last to arrive was Dan’s beloved Land Rover, a temperamental 17-year-old that he had named “Deziree,” after a tempestuous Italian friend. Deziree had become a symbol of Dan’s adventurous spirit and had carried him across Africa on adventurous safaris, including a three-week journey with 14 friends across four countries to a refugee camp in Malawi where they provided money to build two wells to serve the camp’s 14,000 refugees. Deziree never was very reliable, and on the way to her owner’s memorial service, the ancient vehicle broke down and Dan’s friends had to push her to a place of honor near the altar.

Following the service, a huge bonfire blazed, commemorating the spark that Dan had lit in other people. After most people had left, I wandered over to Deziree, and as I reached out to touch her, I felt a wave of despair, knowing that I would never find happiness without my son.

I felt a tug on my shirt and looked down to see a small Kenyan boy, one of the countless kids Dan had befriended. “Don’t cry, Kathy,” he said, his eyes clouded. “Please don’t be sad!” Reaching into his pocket, he pulled out a toy Land Rover. Handing it to me, he said, “This is for you. It will remind you of Dan and make you happy.”

Aware of how precious the toy was to the child, I started to say no, but then I spotted a familiar light in his eyes and realized suddenly that Dan’s spark had not been extinguished but was living on in his young friend. The car in my hands was a gift of hope, a declaration that my son’s death was not the end of my life but represented a new beginning. Although I had no idea what lay ahead for me on the journey I now had to make without Dan, I knew that his radiant light would forever accompany me. Thanking the boy with a hug, I tucked the toy in my pocket.

After the little boy had left and dusk was gathering, I placed the little Land Rover on Deziree’s hood and watched as a cluster of Masai children gathered around it. I could see the sparkle in their eyes as they stared at the toy. One small boy reached out his hand—then looked up at me. I nodded, and instantly his fingers encircled the car as though enclosing a gold nugget. As the children scampered off across the plains, their pealing laughter reminded me that the spirit of my son, “Lesharo,” the laughing one, was still very much alive.

Kathy Eldon has worked as a journalist, author, and film producer in England, Kenya, and the United States. She is the founder of Creative Visions Productions, which produced Extraordinary Moms, a documentary about the power of mothers to change the world. Featuring Julia Roberts, Secretary of State Hillary Clinton, Rosie O’Donnell, and Christiane Amanpour, the 90-minute film aired on Mother’s Day on the Oprah Winfrey Network (OWN). Kathy is also founder and chair of Creative Visions Foundation, which supports “creative activists,” like her son, Dan, who use media and the arts to create positive change in our world. The foundation has incubated more than 100 projects and productions on five continents that have touched more than 30 million people and helped raise more than $11 million.