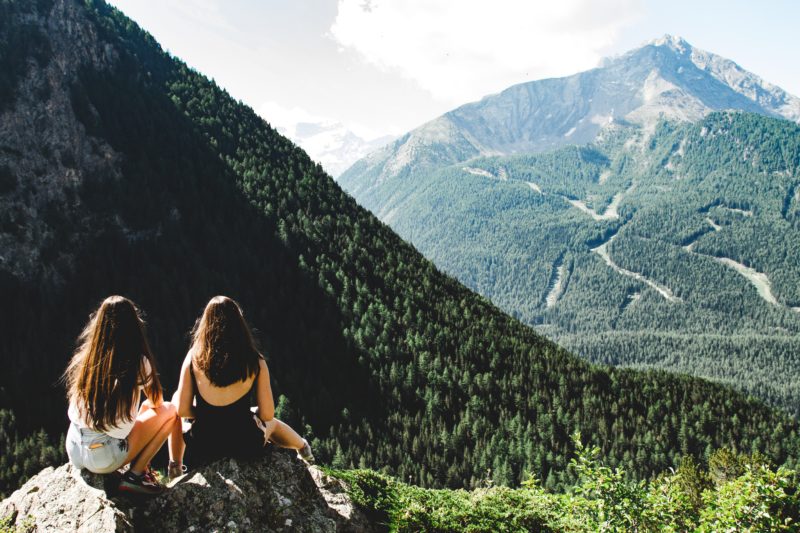 The Language of Sisters

I don’t expect it’s this way with all siblings, but Wendy and I could talk to each other about almost anything. We didn’t always agree; in fact, it was often the opposite, but we could communicate in that way I always imagined only certain siblings possibly can – without fear of alienation, without risk. No matter what was said, we would always be connected, and even in the midst of disagreement, we would understand one another. We could talk about our parents and our shared history, we could talk about our friends, and we could talk about our fears. When she died, I knew I would never have that again.

“We should check it out, she said, the conference is in Hollywood. It is 10 minutes from your apartment so I can just come out and stay with you. See if we like it. See if it helps.”

It sounded good to me. It was worth a shot; anything was worth a shot. Wendy had been gone for almost four years. I had been thrust into only childhood as a 26 year old. We were finally done with murder trials, the ones responsible put away for good. The driving purpose we’d had since her murder to see justice served was about a year and a half gone. I didn’t have a job or a direction. I had just turned 30, on the cusp of what was supposed to be the next decade, the next era of my life. I was living in limbo.

The hallways were filled with people. On the first day, I sat by myself in the back of rooms filled with chairs. I sat in circles without talking. I drank too much wine in the lobby bar with my mom. I bid on some things in the silent auction and listened to speakers at a luncheon in the middle of a banquet room on Hollywood Boulevard and thought, this is not my life. In my life, Hollywood Boulevard means a crazy night out with Wendy that ends with her in the back of a tattoo parlor getting a tongue piercing. It means me laughing with her and she sticks her swollen tongue in a cup of ice from the convenience store across the street. That is my life. I don’t know what this is.

On the second day, I saw a workshop. “On Becoming an Only Child After the Death of a Sibling.” That’s me, I thought, starting to wrap my head around my new normal. So I sat in the circle and a girl with impossibly long black hair started to talk. About her sister Emily and how she died in a car accident when she was only 16. How suddenly at 20, her life wasn’t the one she recognized anymore. Her name was Kim. She swore and laughed and talked with her hands for the next hour and fifteen minutes. And something clicked. I felt a moment of connection and belonging, found a place free of judgment and fear. Kim and I talked in the hall. I thanked her.

The next summer, the conference was in Boston. This time I met more siblings and Kim was there again. Staying at the hotel and not in my apartment was more inclusive, and so I started to find more connections with brothers and sisters from everywhere. Deep friendships formed, ones that continue to exist outside of the conferences and outside of our shared losses, but the one with Kim was something different. A place I never expected to find.

We spent more time together that year, talked about the challenges of holidays and she invited me to Raleigh for Thanksgiving. That following fall, I just up and went. It was still too hard for me to be home with my own family so I welcomed the invitation to borrow hers.

And we discovered new things. That I was born in April, the same month that Emily died, and that Kim was born in October, the same month Wendy was killed. Kim and I are six months apart in age and so were our sisters. She was 20 and I was 26 when the deaths happened but we had both been adults, living on our own, albeit in very different ways. These things are all just the uncanny coincidences. The fact that she purses her lips the same way Wendy did when she’s thinking. The part where she is so much like Wendy, not just in her features, but in her adventurous and outgoing nature, the part where she tells me as much as she is wild like Wendy, that I am serious like Emily, these are all certainly remarkable. And maybe these are all parts of the why, but ultimately incidental to the biggest thing.

I have close friends, the ones I’ve known my whole life, the ones I lived with in LA, went to college with, talk to every single week, see all the time. They are all pieces of my heart, but Kim is a piece of my soul. We don’t need to talk every week or even every month. We don’t see each other every year, though we are getting better at that again. But I can tell her things that I can’t tell anyone else. Can talk to her in ways I can’t talk to anyone else; ways that are only like how I talked to Wendy. It doesn’t matter if time has passed; we never have to catch up or reconnect, beyond recapping the facts of any missed time. We don’t share the same family, but we share the same pieces of being a family, of losing parts of our family. We don’t share the same past, but our pasts are connected. We live lives we once didn’t recognize as our own, and somehow, I think, that helps us to recognize one another. Almost from the get-go, we spoke the same language. It’s that one of sisters. The one I thought would never exist again.

It’s not exactly the same, but it’s as near as I can imagine something could be. If my thought is this is only something I can talk to Wendy about, I know that means that I can call Kim. It isn’t like having Wendy back with me, nor do I imagine that it is like having Emily back for her. But it’s a consolation prize like no other. A gift handed over to us from Emily and Wendy. Wherever they are, I imagine them sometimes together, looking on, laughing, and nodding in agreement at their genius.

Karen Soltero is a bereaved sibling, having lost her younger sister Wendy on October 28th, 2000, when Wendy was shot and killed during a random robbery attempt in Hollywood, CA. Karen has been an active participant in The Compassionate Friends, attending both local chapter meetings and national conferences. She is also involved with the Brady Campaign for the Prevention of Gun Violence and has spoken about her sister at a number of events. Karen works hard on a daily basis to keep the spirit of her sister Wendy alive - by celebrating her, talking about her, commemorating birthdays and anniversaries and always working hard to make sure that even new friends have an opportunity to get to know her.