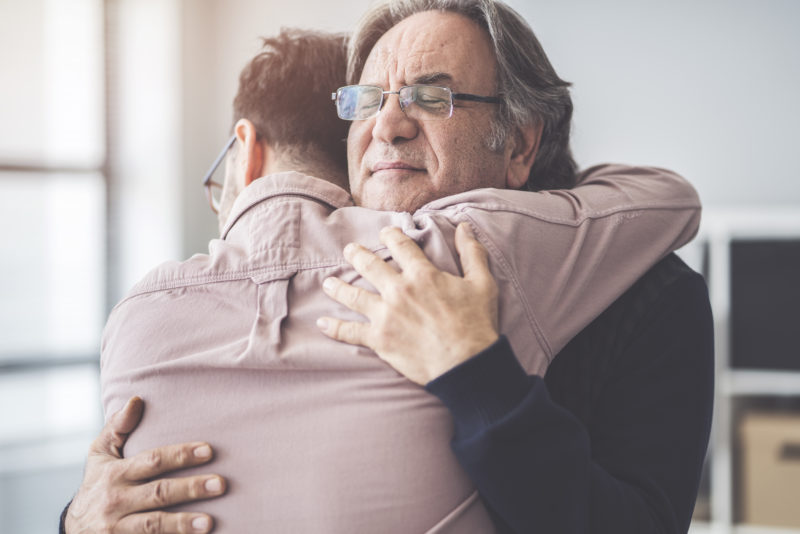 Let’s Not Forget About the Dads

PEOPLE SEEM TO FORGET about the dads in grief. They will ask, “How is your wife?”  Not realizing that his heart has been ripped out of his chest. This happens often.  But what is important to remember is that both parents share their pain and grieve equally.

We would go for lonely walks together, talk about our faith and how we truly believe God would not want us to suffer as we are. We would talk about Trisha and cry over our loss. It broke my heart to see him so distraught, knowing how difficult it was for him to hide his emotions at work and not break down as I so frequently did. He had his job to keep his mind active most of the time, but he also had low tolerance for dealing with people who complained about having a bad day. He kept a photo of Trisha at work, and newcomers, not knowing about our loss, would comment on how pretty Trisha was. He would tell them that she was killed in a car accident and would speak about the tragedy, leaving them to give their tearful condolences and feeling devastated as they walked away.

There were times I would be so worried about him. After his 30-minute commute, he would enter the house with a loud and frightening outburst of tears. He would explain how he cried all the way home or chased a car because the young girl behind the wheel looked like Trisha, and he needed to get a closer look at her face. I would cry with him and explain that I couldn’t lose him as well. He was falling apart before my eyes and I knew he couldn’t go on like this anymore. I knew it could damage him both physically and mentally. I could barely help myself and I needed him to be strong for me. It was somewhat selfish on my part, but I wouldn’t know what to do without him.

Many days I would see him entering Trisha’s bedroom to cry to her as if she were present. He would then calm down, and with an excruciating sigh, repeat over and over “Oh Trish. Oh Trisha.” Still today, he nods his head from left to right in disbelief, repeating those same words.

When I felt as if I were at my breaking point, he would be my rock. Being so upset with hysterical tears, he would comfort me with a hug, trying to be strong. Many times, we just held on to one another and used our shoulders as support when our legs would be too weak to stand. He was forced to play many roles: support for me, productive at work in order to get his job done, and still be a functional dad to our son who wanted to be away from us as much as possible.

I would hear my husband cry in bed softly as if not to disturb me and I would give him his “space.” And on those days when I would be lying in bed crying in my pillow, he would snuggle over to embrace me until I was able to catch my breath and calmly stop. That was exactly what I needed. He was so filled with grief and sorrow it showed on his face. He felt stress and it was obvious. He began having patches of hair fall out and his balding spots were becoming more and more visible. He went to the doctor and was told that the stress caused by the loss of a loved one was causing this to happen. He received multiple injections into his scalp and after many painful treatments his hair grew back. This was another loss for him, as his appearance has always been an important part of his physical demeanor.

People assume that a mother’s love is the stronger of the two parents. Although we tend to both feel a special individual bond with our child, it is wrong to assume that the dad’s love is the weaker. My husband would mention how others would ask about his wife and totally ignore the fact that he was filled with grief and heartache. He aches with grief and 17 years later he still cries. He will always long for his little girl. Moms are vocal but dads seem to hide their pain. I would think nothing of crying in front of a person while speaking of Trisha even today, whereas her dad, although unable to do it early on in our grief, will now try to hold back his feelings. I guess it is part of a macho thing and there is the old saying that real men don’t cry. But do not let their masks fool you because a part of them is missing as well.

When we first arrived at our support group soon after we lost Trisha, her dad cried hysterically and could not hold back his pain and fear. We held hands for support, and the other dads embraced him soon afterwards. It was comforting for them to see a man break down emotionally and this allowed them to let their guard down and show their emotions as well. A father’s grief is strong because of the image they try so desperately to uphold. In some cases, it is stronger than a mom’s grief in having to physically carry around that image that forces them to keep their head held high when feeling pressured. Consequently, they bury their feelings. Their children are their life. They are responsible for bringing their children into this world and share in carrying them; not physically in the beginning, but afterwards for a lifetime. They support their children in more ways than one and maintain that strong appearance as a tough guy, but it’s only to keep their family strong and whole. When a piece of that is disrupted, they feel the burden and guilt of not doing their job, and failing.

A dad also carries the title and responsibilities of a husband and son and has the gift of being a problem solver, a mentor, and the one who fixes what is broken even if it’s a broken heart. When a dad loses his child, he feels hopeless and somewhat helpless because there is no solution and nothing within his power will remedy the pain. In most cases, dads are an important part of the foundation that holds the family together.

Never underestimate the love of a dad for his children. It is a gift he brings to the family both physically and mentally and it’s his support that will allow moms to do their nurturing and loving. Anyone can be a father. But it’s a dad that is the family glue.

Paula Osipovitch is an author of Almost 18, A Mother’s Journey Through Grief. She is a song writer and has sung for various bereavement groups as well as The Central Jersey Chapter of TCF.