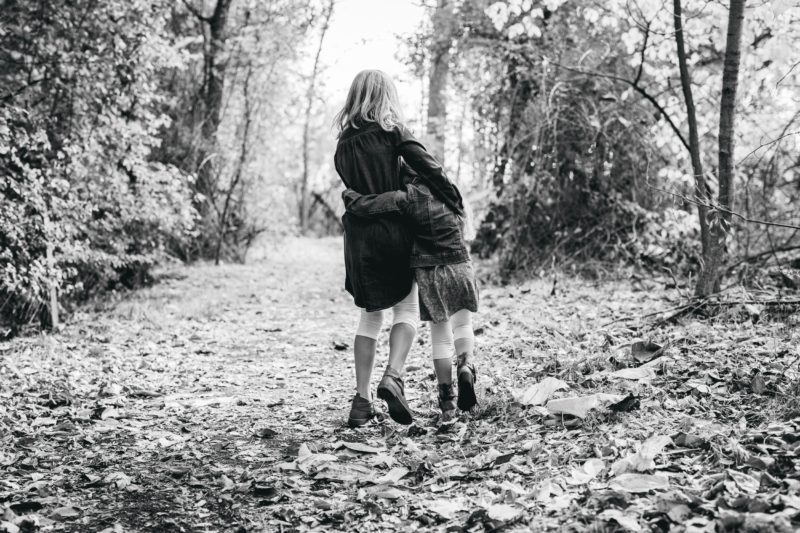 Lessons of a Big Sister

There was a game we played when we were little, my sister and I. It had a certain set of rules and unique characteristics. Our playing field was the living room, our teams were Kathryn vs. Karla, and our referee was our mother, who watched us closely, peppering us with disapprovals to slow down. It didn’t seem like much next to the neighbor’s soccer game in the backyard, but it was our game, and we could play it together. To keep her feet warm while she sat receiving her fluids, Kathryn wore bright yellow Pooh Bear socks, two sizes too large and perfect for slipping off. I would slink around the edge of the couch and she would pretend not to see me as my hand jolted forward to snatch her sock, greedily grabbing a toe or two in the process. I escaped around the corner to hide it in one of the front rooms. Sometimes it went into a drawer, other times behind the potted plant, and if I was feeling mischievous, two steps up on the stairs. As I boisterously hollered for her to begin her search, Kathryn would walk the trusty IV along like her sidekick to find the Pooh Bear sock. Just before I was ready to burst with anticipation, she’d wheel around the corner holding the prize above her head like a gold medal winner of the Olympics.

Rapidly dividing cells seemed to be her demise, going by the alias of “cancer.” To her six-year-old sister, this word meant more than “abnormal cells dividing without control.” To me, the word cancer meant shots and blood. It meant “tubies” sticking out from my sister’s chest like a tangle of greedy snakes. It meant the sickly sweet chemical smell that permeated everything. It meant long nights filled with yelling, vomiting, and crying. Cancer meant death. But Kathryn never let cancer define her. Her bald head was beautiful, and she proudly revealed her scar to anyone brave enough to look. Watching Kathryn’s battle was the hardest thing I will ever do. But Kathryn knew how to look fear in the face. That girl had guts.

Kathryn taught me how to live. She had every reason to quit, but her spirit was never broken. No matter what hardships I may face today, I know I can conquer them; that was the legacy Kathryn left me. When the time comes for me to face my own struggles and my core is exposed, instead of losing my morals or standards to overcome the struggles, I will be strong and brave, just as Kathryn taught me. When the smoke fades and facades are broken, the strength of a person is exposed. I was given a gift; I had six precious years with my sister to learn the secret to life and to figure out the person I wanted to be. The bitter reality of a life cut short has matured me quickly but has also kindled a fire that is now the center of my beliefs. I have been humbled by Kathryn but at the same time, inspired. If my big sister could muster her way through six years of treatment, I know I can tackle calculus, petty high school drama, and maybe even college applications.

Even though Kathryn’s life was predetermined to be fleeting and bare, she filled it with the most life, love, and laughter of anyone I’ve ever known. Kathryn showed me true tenacity and endurance under the strains of adversity. One day, when I am faced with my own set of hardships, I will be able to look back to Kathryn’s example, which has pioneered the way for me. I know I can conquer my future challenges and in the end, I will be able to hold up my own yellow Pooh Bear sock and know that not only have I made myself proud but that I’ve made my big sister proud.

Karla Levering is a member of the Knox County Chapter of TCF and lives in Powell, Ohio, with her parents, Ken and Suzanne, and her younger sisters, Kristen and Kelly. Karla’s older sister, Kathryn, was diagnosed with neuroblastoma at two and half years old, and after six years of treatment, passed away. Karla has learned many lessons from her big sister that she has applied to her own life, and she hopes Kathryn would be proud.