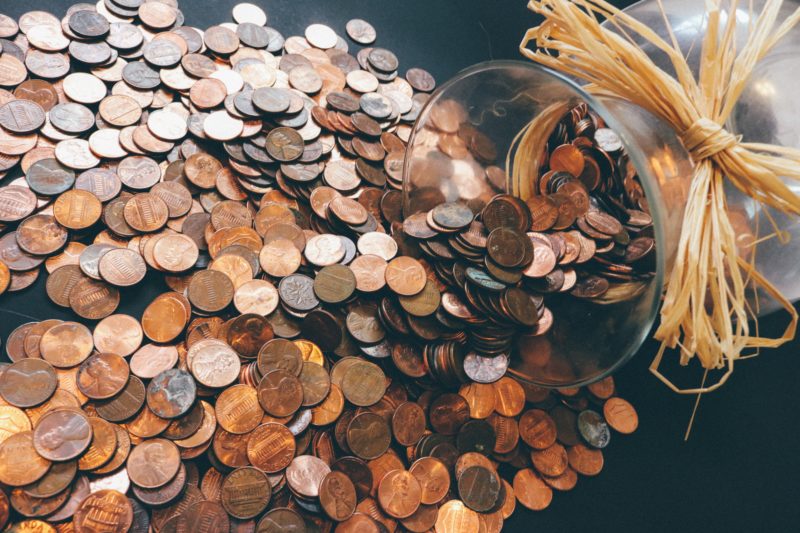 It’s always a pleasure to open the mailbox and find a handwritten note from a loved one, especially when it is from one of your grown children. I eagerly opened the envelope from my oldest son, recently graduated from college and beginning his career as an engineer in another state. Taped to the bottom of the sheet of yellow notebook paper were two pennies and a note explaining that the first penny he found in the driveway of his new house and the second he found at the site of the mine project he had just been assigned.

We believe the pennies are signs from his little sister Kaylyn who lives in heaven. My beautiful three-and-a-half-year-old daughter was killed in our backyard when a dead fork of a large cottonwood tree fell on the trampoline she and I were playing on. That was in 2002 and, over the past decade, we have found pennies in the strangest of places and at times when we miss her the most.

Of all the countless prayers I have prayed, both then and since, one of the very earliest was to receive a sign telling me she was well. I asked for something tangible, something that I could hold on to as I struggled to put our lives back together in the aftermath of the tragedy. The first penny I found was sitting on the coin box at the car wash and I knew it was from my daughter. The day she was killed we had taken the Jeep in to be washed. While I worked, she unbuckled her car seat and pilfered through the glove box while sudsy waves washed the exterior of the vehicle, then hurriedly put the mess straight before I got back in.

It was all I could do to drag myself to the car wash after Kaylyn died. I had to sit there for several minutes before I could even get out of the car. My leaden hands worked mechanically to retrieve the coins from the pocket of my jeans. In the midst of the deep dark depths of pain, I saw a bright shiny penny just sitting where people usually leave stray quarters. Without a doubt, I believed the penny was a sign that my prayer had been answered.

When I came home there was another penny lying in front of the door to the back porch. I had walked through that very same door less than 20 minutes before. No one else was home, and no one had been there while I was gone. The front gate was locked and the door so tight and close to the cement that opening it when I left would have pushed a penny to the side. Clutching the two pennies, I walked over to where the trampoline had been. I felt God’s presence was so very close and when I looked down, there was another penny lying on the ground. A few days later, while moving one of the funeral plants on the living room end table, I discovered another penny.

That was just the beginning of our signs from heaven. During periods when it has been too difficult to even speak Kaylyn’s name, one of us would find a penny and hand it to the other. No words were necessary; we knew where the other was coming from. As a teen and a preteen, it was difficult for the boys to watch their mother cry and know what to do. The pennies from Kaylyn helped to bridge that gap.

The first job I had following Kaylyn’s death and my subsequent abandonment from her father was teaching at the middle/high school where the boys were students. There were many times when we were walking home together that we would find a penny in our path. Not many people walked the mile-long stretch, so it wasn’t as if a number of pennies were falling out of backpacks and pockets. It was a tumultuous time with one son in high school, another in middle school, being a single parent, dealing with a divorce, joining the workforce again, trying desperately to keep my head above water emotionally and financially, and all the while, grieving the death of my precious daughter. It was so awesome to have one of my wonderful sons hand me a penny at a time when the weight of the world was pulling me down. God was holding us in His hands, and I could feel it in the love and understanding shown to me by my children.

Milestones in our lives, such as the first day of school, championship football games, prom night, homecoming, opening day of hunting season, holidays, birthdays, graduations—the list is endless—have been heart-wrenching. I watched the older boys grow and mature and progress through school and their other interests and activities, and at the same time, the little girl I had so looked forward to doing the same with was not with them.

At the boys’ and my baptisms, I held a penny in my hand that I found by the sink of the changing room. During trips to buy show steers for the boys’ 4-H and FFA projects, we have found pennies from Kaylyn to keep us company. On the road trip to look at colleges in Wyoming, Montana, Colorado, Idaho, and New Mexico, a cache of several pennies rode on the dashboard of the truck. Pennies were discovered moving each of the boys into their freshman dorm room at college. As my career transitioned from teaching to publishing the local newspaper, I found pennies during both trying and profitable times. I even found a penny in the mountain meadow where I bought my equine friend, Amigo.

Like the early emotions and depth of loss, those early findings were strong and overpowering. While those tidal waves of emotion have subsided, ten years later I still pause and say a thankful prayer each time I find a penny and share a few private words with my daughter. I often laugh out loud and marvel at her playful nature. I think she thoroughly enjoys the unusual places we find her pennies. A year ago, I married the love of my life, and walking up the steps of the church on the day of our wedding, we found a penny. There was a penny waiting for us on the way to the closing of the farm and ranch we bought together.

Our lives have moved forward, and Kaylyn has been right there with us every step of the way. Love really does live forever. I have a vase full of pennies sent straight from heaven to prove it.

Kelley Collins McCrain lives on a ranch in Paonia, Colorado, with her husband and two younger children.