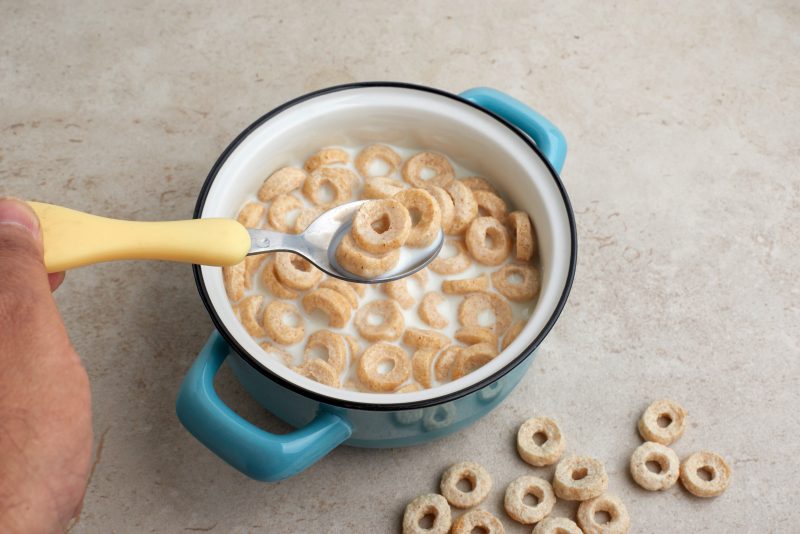 Sometimes opportunity sleeps in catastrophic calamities. Sometimes there is hope for the heart in a little bowl of Cheerios. Whether or not we actually see this opportunity, or use it in some sort of positive fashion, is a choice. What motivates mending lives ravaged by the death of a child that died too soon? Swim through the grief or sink into oblivion seems like the only choices of necessity as the mother of invention proclaims that no other options exist. Or it might be a little box of Cheerios that had never contained anything but a simple, round breakfast cereal.

Moments of time have drifted by the stationary heart as the relentless river of tears has decreased or maybe even ceased altogether. The persistent push of that heavy weight of an imaginary knee on the chest that prevented a full breath still happens but not as often. The anniversary dates are obvious, but experience has taught that anticipation is sometimes worse than the actual day commemorating the event. The calendar moves from one day to another, returning again in a seamless, sad circle that often softens as we struggle to survive. The details that framed the death of a child may eventually surrender to a curious fuzzy blur of time and circumstance. We are healing as the woeful, debilitating waves of pain eventually may have more distance between them, allowing a breath or securing a deep sigh now and then.

Moms and Dads try to get ready for that first year of life without their precious child in familiar ways that they utilized in the past for other notable normal events. Sometimes the best-laid plans just don’t work. You are not going crazy as you arrange then rearrange, organize then reorganize the days of significance that occur throughout the year. To be lost in a familiar world is the rule, not the exception, for the agonizing bereaved parent. Some of the efforts work while many of them do not. The day that parenthood was first announced, the actual birth, or the date that life changed forever demand recognition and at times cannot be willed away, though the attempt to do so may be applauded. Experience helps parents adjust expectations for the special days. As the Mom or Dad moves further away from their saddest reality, they may then feel the tiny hopeful signs of a kind of profound healing or just getting a little better drifting over them, embracing a little peace. We don’t get over it as we never get over ‘it’, but rather we go through it. We survive.

Then the unexpected occurs and the sighting of a little box of Cheerios, as innocent as your child, brings you to your knees with oh, so fond memories of happy times that are startling, visible and real, and gone. Cheerio moments that jump off a grocery shelf shouting memories of yesterday and stomps your heart with arrogant immunity reminding the sad soul there are no tomorrows the way we want, the way it used to be. First came your smile as the remembrance was fond and takes you to pretty thoughts, then in the same motion cruelly crushes the spirit with the inescapable thought of finality. My child is gone from here forever.

The Cheerios have such power to bring back a beautiful, now special fun memory eternally captured in a parents’ mind and soul. How he loved this simple circular cereal. He formed the round bit of food in his mouth then giggled as he discovered he could breathe with his mouth shut if he held that little Cheerio between his tiny angelic lips. Everyday there was something new, but the Cheerio scene replayed itself as the ‘Hey, Dad look at this’ seemed cuter than the day before. A child and a parent were sharing fun. Whoever thought how priceless that moment could be? Whoever thought it would ever end? Whoever thought….

“Don’t choke on your food’ and the classic perfunctory ‘don’t play with your cereal’ uttered not as an order so much as responsible parental adult speak attached to an obvious grin comes to mind as my only comment.  We did chuckle as my little guy urged me to ty it. Surrendering to his request, I tried, inspiring his comment, ‘the Cheerio has a mustache hat’ he could barely get that comment out between laughs. Giggles all around.

Little kid fun just being what he was supposed to be, innocent, perfection. That memory will never eliminate the fact that he is not here, but today, at this moment, it softens the other not-so-good memories. To focus on the good little boy playing with his Cheerios is the memory of choice, and today it surpassed and suppressed all the others. Thank you, my little one, and please save some Cheerios for me.

In 2000, Pat O’Donnell and his wife, Janet, were devastated by the tragic death of their 18-year-old son, Brian, in an automobile accident. They credit their local chapter of The Compassionate Friends for helping them rediscover hope in their lives. Pat eventually served as a chapter leader and served as a member of the national TCF Board of Directors. Janet and Pat served as co-chairpersons for the 2006 TCF National Conference in Dearborn, Michigan. They have one other son, Andy. Since Pat’s brother Billy passed away in 1972, he has suffered the loss of his brothers, Jim and Tom. Pat can be contacted at billyodee@yahoo.com.